Recently, I was chatting with my friend Kevin Mccabe, who, like me, is a former TV sportscaster.

“I hope I wasn’t mean to you,” he said, looking a bit sheepish.

“Back then we would say, ‘There are no broads in broadcasting.’”

I explained he was never anything but kind, and yet I was reminded there were others who were not. Some of whom went out of their way to ostracize me in the sportscasting world in which I plied my trade in the 1980s and 90s.

There were times people made me feel unwelcome when I worked as a sportscaster at ESPN in the 1990s.

There was the guy at ESPN who – back before all things were available on the Internet – was the human computer who could answer any sports-related question put to him. “Hey, Howie,” someone in the newsroom would call out. “When was the last time the Steelers were beaten at home in the snow by more than 17 points?”

I’m not joking here. Yes, he was a treasure, but I would discover he didn’t feel women belonged on the hallowed ground that was the SportsCenter set. I couldn’t have been more surprised when I was summoned to the news director’s office one afternoon and berated for going on the air with faulty information.

“But I asked Howie,” I sputtered. “He gave me the facts.”

As if on cue, Howie appeared in the doorway. “No, I didn’t.”

And, so, the light bulb flashed. I was on my own.

Another time, I was covering the NBA playoffs. The Suns were facing the Golden State Warriors on the road. We local Phoenix sports reporters traveled on the team charter, stayed in the same hotel, and went out for dinner and drinks after our packages and live shots were done.

One evening, as we all were saying goodnight, I asked one of my peers what time the press conference was the next morning. He looked at me and my videographer, smiled and said, “Ten thirty.”

The next day, I arrived finding an empty practice room. Not a player in sight. Then, I saw him sitting in a first-row seat, hands clasped behind his head, legs spread out casually before him.

“Are we a little late,” he purred.

The NBA’s Manute Bol was one of the good guys.

My videographer, a big guy, stepped toward him menacingly. We were both on deadline, scheduled to produce a package on Manute Bol for the 5 o’clock news.

The other reporter stood, smiled, and smugly walked away.

“We’re screwed.” I said. We both uttered myriad profanities.

Then a woman appeared. She worked in the Warriors media department. I explained what happened.

“The players are done until pre-game tonight. This is their personal time.” She shook her head and looked as if she felt sorry for me. “I can ask Manute. I can’t promise anything. But I’ll tell him you’re here.” 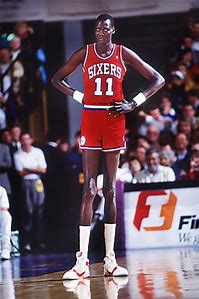 Bol would play ten years in the NBA, but basketball did not define him.

At almost 7’7″ tall, Bol and Romania’s Gheorghe Mureșan together hold the title as the tallest men to ever play in the NBA. Admittedly, I was unprepared when, about forty-five minutes later, Bol appeared. I’d been around a lot of big men, but Bol was overwhelming. Then, he smiled, instantly putting me at ease.

I introduced myself, held up my microphone – which with my arm stretched out barely reached his chin – and heard the camera click on. As Bol answered my questions in a lilting accent, I noticed the incised scars on his forehead, the result of a manhood ritual that also included the gouging out of six teeth.

Bol grew up in Sudan, where, as a boy, he reportedly killed a lion with a spear to protect the family cattle. He would play in the NBA for ten years, where he would get a reputation for having a temper. Bol, who’d suffered taunts about his height his entire life, was not much over 200 pounds when his professional career began. His slim build and awkward style led other players to think they could push him around. Still, Bol would block 2086 shots during his career.

Bol removed a white towel that was draped around his neck and dabbed at his forehead. The camera clicked off. I thanked him. He smiled broadly and lumbered away. 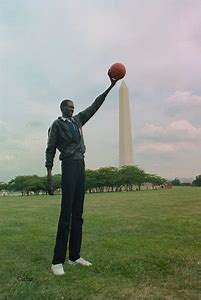 But basketball didn’t define Bol. He would go on to become a human rights activist in his war-ravaged home country. It’s estimated he made about $3.5 million dollars while playing in the NBA. He gave just about all of it away to help the people suffering in Sudan. Bol would die from an acute kidney infection and a rare skin disease in 2010.

NBA great Charles Barkley, a long-time friend of Bol’s, summed him up succinctly in a Washington Post article.  “I’ll tell you this—if everyone in the world was a Manute Bol, it’s a world I’d want to live in.”

When I’m asked about the way I was treated when I was a sportscaster, I’ll admit there were some bad guys. But it’s the good guys I remember most.