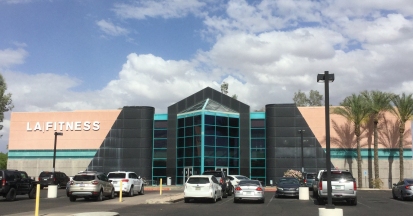 Soon my health club will be demolished, reportedly to make way for condos. I’ll miss the old place and the friends I made there.

I’ve been going to the same health club for about 20 years. Recently, it closed its doors, the victim of outrageous land prices here in Phoenix. I heard the corner sold for $30 million. Its future a stack of condominiums.

Why am I writing about this? I started thinking about the time I spent in that building and the people I’ve known there.

There’s Bob, the Vietnam vet who always has a kind word. Charlie, the retired attorney and bird fancier. Tony who owns a rug-cleaning business and finds humor in everything. Abraham, a former Israeli paratrooper turned restaurateur turned retiree. And Big Bruce, who once played for the Australian National Rugby team and worked worldwide in the hotel industry before retiring.

I can’t count the hours we spent talking in the spa and swimming pool. Even fighting at times. Eventually, we decided politics were off limits in the water, still our bickering was mostly good natured.

Then there was my friend Frank. An old Texas curmudgeon and former high school football and basketball coach. Frank convinced me to become a teacher, when my reporting career fizzled out.  A recovering alcoholic who was quite proud of his yearly sobriety chip, he could be a cantankerous old coot. And yet, one year he just locked the door to his condo and moved to a homeless shelter to run the place. We got to calling him Father Frank, though he told me many funny tales that didn’t paint him in such a saintly light. He died last fall, though I sometimes think I still see him walking through the front door.

There were others I didn’t know well. The guy who was living out of his car and who intentionally bore a resemblance to the original TV Superman, with his black pompadour, cinched belt, and skin-tight top stretched over a muscular build.  I swam next to a woman who may have been on the spectrum. We talked about life struggles and sometimes giggled at the men who strode around in Speedos. Some hot, some decidedly not.

As I took my last laps in the pool – one of the few in the area that is actually 25-meters long – I contemplated how many miles I’d traveled over those dark-blue lane lines. A quick calculation revealed I might have trekked as far as Pittsburgh.

My club was not the fanciest, nor the cleanest. We all complained when the steam room sputtered, the pool filter died, and the spa needed refilling when all we wanted was a good hot soak and a chat.

Despite its shortcomings, it was home.

When I was leaving that last day, I thought of the man I’d heard about recently. Like me, he was a regular. He was upstairs on the treadmill, chatting with another patron of the place.  After his workout ended, he walked over to a bench, sat, and nodded his head to rest. He looked so peaceful, no one realized he’d died.

I don’t know that I believe in spirits or not. But I wonder if he’s still there.

And I wonder who turned out the lights.

2 thoughts on “Who turned out the lights?”