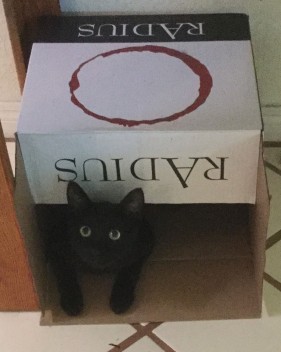 This kitty needed a home, but I was conflicted.

“Ms. Montgomery, there’s a cat outside.”

Two of my students stared at me.

“Go and get it,” I said, immediately rethinking that idea after they’d left the room. I hoped the cat wasn’t mean or scared and left the kids with bloody gashes. I tried to stop them, but they were gone.

A short time later they returned, sans cat. “We couldn’t catch it,” they said in unison.

“OK.” I was relieved, but just momentarily.

“It’s so hot out there and the cat is panting.”

I looked at the sweet girl who tried to rescue the animal. “Is it hurt?”

Crap! I’ve had more kitties than I can count over the years. Strays and cats who’d wound up in shelters. But I didn’t want another one. I still had three furry felines – down from seven – most of whom died after long, pleasant lives. And a big cattle dog, as well.

The problem is, I’m getting older, and whenever I’m faced with a new pet I start doing the math. If said animal lives 15 years, how old will I be? What if I die? Who will take care of them.  While I know my sweetie pie is as devoted to our four-legged friends as I am, what if we both died?

“So, you think the cat might be injured?” I said again.

“Let’s go.” I led my students outside and found a sleek, black, kitty with big gold eyes. The creature meowed and ran right to me. I picked him up and prepared to be speared with curved, pointy claws, but he just laid his head on my shoulder, clearly no feral beast.

As it was lunchtime, I put the young cat in my office and, as I ate, he jumped into my chair, curled into a ball and slept at my side. “Well, aren’t you a sweet boy.” I patted his head and he purred loudly. I squinted as he closed his eyes. “But I don’t want another cat.” He ignored me.

Later, the girl who found him appeared and said she wanted to take the cat home. “My mom said it would be OK.”

I looked at the kitty and he stared back at me. “Great!” I said, not feeling great at all. “Let’s find a box.”

After we placed the cat in the container, I waved and watched her walk away. I admit, I was a bit sad. Still, I’d done the right thing.

“We found a cat at school today.”

My sweetie pie peered at me over his glasses, then glanced around the room.

He raised both eyebrows, and didn’t have to say, How unlike you to not bring it home.

Later, I thought about the cat and decided to call the girl’s home to make sure he was settling in. Her father answered the phone.

I sat up. It was close to 110 degrees in the Arizona desert that day. “A cage?” I jotted down the address. “I’ll be right there.” 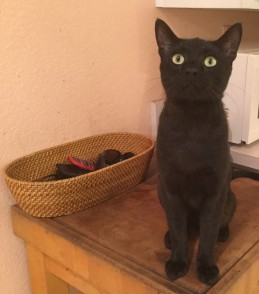 The new kitty got comfortable right away.

An hour later, I released the kitty in my living room, and he quickly made friends with Westin, my deaf Bombay cat. And then I noticed the similarity. They were almost identical. They nuzzled one another and again I realized this cat was no stray. He belonged to someone. He blinked at me and meowed. “No, my friend. I can’t get attached to you.”

A few days later, the vet waved a hand-held machine over the cat’s shiny fur. My heart beat quickly. A chip would be good,” I told myself. I’ll take him back to his owners, who are surely missing him.

I exhaled, then stared at my new kitty, who the vet informed me was just a baby at ten months old. I started to do the math, then stopped. I realized it didn’t matter that I’d be pushing eighty when he reached 15. As much as I tried to deny it, this cat was mine.

He head butted my hand and stared at me with those huge gold eyes.

We call him Morgan.

23 thoughts on “Finding a home”