Once upon a time, we were told computers would make our lives simpler. Seemed rational, though we were also told they would lead to a paperless society, which is clearly not the case and is a story for another time.

I’m not arguing that computers don’t give us options never before seen in the history of mankind, it’s just that they make certain things so damn hard.

I’m speaking specifically of cords. Lately, I’m afraid to look behind my desktop where a nest of cables snakes in a pile from my power strip. I have tried reordering the mess on multiple occasions but it always manages to morph back in a tangled heap.

The problem intensified recently when, following my retirement from teaching, I needed to purchase some new computers, as well as a cellphone, an item I was acquiring for the first time ever. (Stop snickering.)

All my new gadgets needed various types of cords, items unimaginatively name DVI cables, HDMI cables, PS/2 Cables, Ethernet cables, USB cables, etc. Though some of these cords came with my purchases, I had to buy others. I considered the cost of these additional wires and wondered why they weren’t included with my new devices. Made me wonder what my dad would have done in olden times had he toted that big square TV home and discovered there was no plug.

After utilizing power tools to pry my cords from their human-proof packaging, I plugged them in. There were so many, I had a brief panic attack. I need order to function, so I tried a bunch of twist ties, but the pile looked even worse.

Then I had to deal with the chargers. In addition to my desktop, I have a laptop, a Kindle, and a phone. But it gets better. I currently have two college-student kids pandemically stuck at home, each of whom also has multiple devices, as well as my sweetie pie who owns a tablet. Chargers sneak from sockets everywhere, though no one seems bothered by this but me. Nor do they struggle, as I do, with the question of which cord goes to which device.

The question arose: Why can’t the cords and their corresponding ports all be the same? I checked that out, figuring mankind had survived with just a few regional variations of the wall plug since the advent of electricity. I discovered there are three types of connectors: “twisted-pair connectors, coaxial cable connectors and fiber-optic connectors. Generally, cable connectors have a male component and a female component, except in the case of hermaphroditic connectors such as the IBM data connector.”

I won’t pretend to understand that. I’m a simple sort. So, when I looked up the different types of ports, I was similarly confused. “Many USB ports look the same, but there are different generations with different capabilities. Some are USB 2.0 and some are 3.0 – the 3.0 ones are blue while the 2.0 ones do not have a special color. 3.0 is much faster than 2.0, but the device you are connecting must support 3.0 to use the extra speed.”

As to the why there are so many variations, even I can figure that out: Money. The various tech companies want us to keep shelling out funds for all those cords. And each company insists on its own special varieties, so no mixing and matching allowed. You know they could make this easier on us, but money rules. And we have no choice, if we wish to participate in the technological world.

Now, if I could only figure out which plug goes where. Sadly, that sometimes involves me sheepishly asking one of the kids for help and hoping there will be no eye rolling, after which I sometimes expect a pat on the head and a smile that says, “Isn’t Mom cute!”

In the meantime, I await a truly wireless world, where my desk is neat and clean and orderly. Is that really too much to ask? 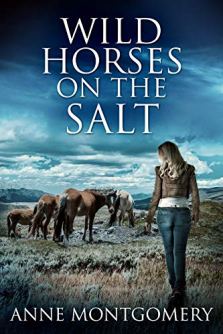 WILD HORSES ON THE SALT

A WOMAN FLEES AN ABUSIVE HUSBAND

AND FINDS HOPE IN THE WILDS OF THE ARIZONA DESERT.

2 thoughts on “Waiting for a wireless world: the curse of cords”