Officiating in the NFL is a grueling job, one that gets no respect. The zebras need some assistance and the league can help.

I’ve noticed that your officiating crews have been, um … taking it in the shorts for quite a while now. I realize throwing flags and blowing whistles in your league is a thankless gig and that your zebras are frequently targets of disdain and, sadly, sometimes outright hatred. So, with that in mind, I have some suggestions that might improve your officiating problems.

First, recruit people who are as athletic as the players they are being called upon to officiate. Here’s how you can do that. Every year on cut day, have someone waiting at the door of every single NFL team. As the players who’ve been cut emerge, offer them a job. Make it a high-paying one, like maybe $250,000 annually. (Come on, you can afford it.) Inform said players that if they’d like to stay in the game, officiating would be a great way to do just that. Now, I understand that many players will laugh and walk away, the idea of being an official repugnant. But some might consider the offer, and the more physically fit and mobile an official is the better chance they have of being where they need to be to get that big call right.

Next, build a minor league system. (Again, you can afford it.) Don’t you think it’s way past the time you should be counting on college football to prepare your players and officials? Come on, look at Major League Baseball. Then, institute a lower-level of professional football, a place where players can get acclimated to the system and where budding officials can get more snaps. Because that’s what they need. And, gosh, I bet coaches might also boost their skills in an out-of-the spotlight league. 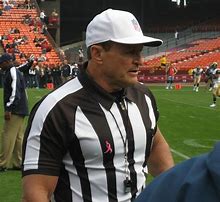 Ed  Hochuli spent 27 years officiating in the NFL. All that time his professional designation was lawyer and his NFL job was part-time.

Then, hire your officials as full-time employees. It’s laughable that, until recently, your officials were not considered professionals. They were lawyers and teachers and doctors and police officers. Officiating was their hobby, making the NFL the only major sport with part-time officials. Right now, you have a few zebras who’ve been hired fulltime. It’s time to give them all that status.

Finally, pay your officials a decent salary, commensurate with the stress of the job and the crap they endure because of it. Currently, you pay your officials by position on a per-game basis. The highest paid officials, the referees, make about $70,000 annually, while those side, back, and line judges earn a piddly $25,000. (Yes, I know they make added income in the play-offs, but that’s bonus pay that is not available to all officials.) By comparison, NBA refs make $128,000, NHL officials earn $139,000, and Major League Baseball umpires bank about $141,000 in regular-season income. So, come on. Give your flag throwers a real salary with benefits like healthcare, because they get hurt out there too, injuries that – like the players – will stay with them a lifetime. Think about this. If you up the ante you might draw more of those young, fit, athletic types you’re looking for. And, while I hate to mention this again, I can’t help myself. You can afford it. 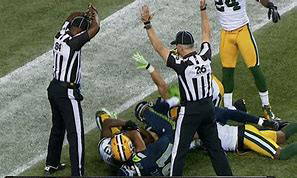 The zebras won’t get every play right, but with a little help the the calls in the NFL will improve.

Will these suggestions assure that NFL officials get every call right? Of course not. But they will certainly improve the situation. If you’re hesitant, just remember the league doesn’t need any more black eyes in regard to blown calls that cost teams the chance to advance in the playoffs. And what have you got to lose by spending a little more of your massive mountain of money to recruit, train, and retain officials?