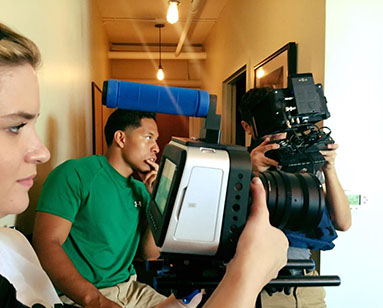 My middle boy, Ziggy, a budding film director, helped me learn how important simple words can be.

I grew up in a family where terms of endearment were never uttered. I’m not saying my parents didn’t care about me and my siblings, it’s just that the words “I love you” were not spoken. In my forties, when I became a teacher, I learned that children often become what they see growing up, so the fact that I struggled with these three small words seemed to make sense.

Those of us unable to verbally share our feelings of affection often struggle, especially when we have relationships with people who come from families where “I love you” gets tossed around like a Frisbee at a weekend barbecue. Then there are the young people, teens and twenty-somethings, who shout out “I love yoooo!” to friends after every momentous occasion, like parting after that daily trip to Starbucks, waving goodbye at the end of the school day, and every time they’re poised to hang up the phone.

It might sound silly to those not afflicted, but hearing such a serious phrase flung about so wantonly and seemingly without much forethought always made me cringe.

My beau of over two decades is one of those people that comes from a family where “I love you” rolls quite easily off the tongue. Early in our relationship, I would sense his disappointment when my response to these words would be a bit muddled, a hurried comment mumbled under my breath. Over the years, he managed to wear my reluctance down a bit. We came up with the acronym LOML – Love of My Life – which is how we end our conversations today.

Still, I did not truly understand the power of those three small words until about a year-and-half ago. I was having dinner with my middle son at a restaurant in Tucson. I have written before about the fact that I am a foster mom, and, though my three boys are now in their 20s, Mom I remain. I sensed he wanted to tell me something. But, as I sometimes – OK often – do, I was dominating the conversation. He was heading into his junior year at the University of Arizona. I was excited at the thought of him studying a semester in another country. But my usually animated boy was strangely quiet and withdrawn.

“There are ways to be successful without getting a college degree,” he said.

I paused, fork-full of dinner half way to my mouth. “What do you mean?” He wouldn’t meet my eye.

“A company offered me a job.” He stared at his plate.

“You want to drop out?” The teacher in me winced. I tried to compose myself. “Don’t you want to study abroad? I think you’d really like it.”

An uncomfortable silence hung over us. I reached for my wine glass, struggling for something to say. Then, he looked at me, despair etched on his face, an expression that broke my heart. Without a moment’s hesitation I said, “I love you no matter what you decide to do.”

When I saw the tears slip down his cheeks, I finally understood the power of those three little words I had so long been avoiding.

Ziggy is now following his dream of one day becoming a film director.  I, meanwhile, am becoming more adept at using the words I used to find so uncomfortable.

“Careful out there,” I say to my students every day when the bell rings. “Wear your seat belts.” And, every once in a while, it just sneaks out. “I love you.”

2 thoughts on “Grateful for the value of words”