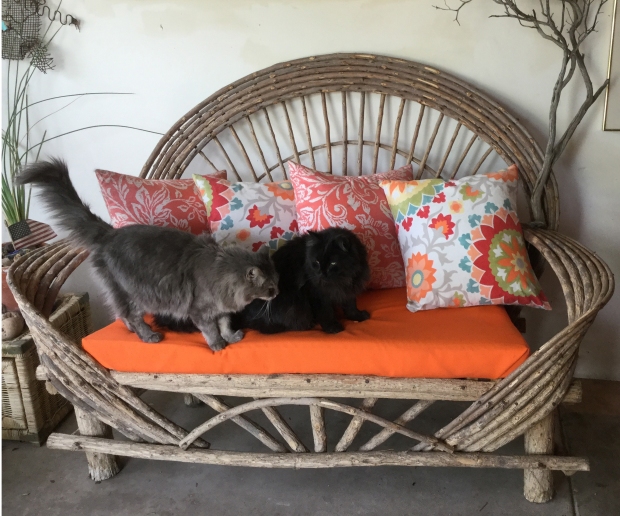 We were lucky to get my couch across the border, but now we have to wrestle the cats for a place to sit.

Concern about our nation’s borders is much in the news. What and who should be allowed to cross those frontiers is the subject of much debate and, sometimes, confusion.

A while back, I found myself in a rather awkward situation at our southern boundary, when a Border Patrol Agent peered at my truck and motioned for me and my sweetie pie to pull into the inspection area.

Up to that point, we had spent a lovely day wandering around Nogales. There was some shopping and, if memory serves, a margarita or two. (Yes, it was the middle the day, far from cocktail hour, but, as I wasn’t driving, perhaps you will forgive me that wee indiscretion.)

When we were on our way back to the border checkpoint, I asked Ryan to stop. On the side of the road, a man had assembled an array of filigreed furniture created from artfully bent tree limbs and I wanted to take a look.

I ran my hand across the curved back of a willow loveseat, marveling at the artistry. “You think it will fit in the back of the truck?” I eyed my black Ford Ranger.

Before long, my new couch had been secured in the bed, bungeed and tied. I was already thinking of brightly-colored pillows and exactly where I’d place the piece on my front porch, when the Border Patrol Agent signaled us to a holding area where we were instructed to wait.

I checked the cab, wondering if we had accidentally missed a piece of fruit or some other taboo product that was ineligible for transport into the U.S. Finding nothing, I shrugged.

Ten minutes passed before the man reappeared. “You can’t take plants across the border,” he said, staring at a clipboard.

I shook my head.

Ryan stepped out of the truck and followed the man to my loveseat.

“See here?” the agent said, indicating a row of bright green leaves sprouting from a curved limb. Then he pointed at several more. “It’s a plant. And you can’t take plants across the border.”

I leaned out the window. “But it’s a couch!” I implored.

The agent walked to the cab and began writing on his clipboard. I glanced at the side mirror and noted movement by the back of the truck. A short time later, Ryan opened the driver-side door and got in.

“Plants are prohibited,” the man insisted, staring at us with a tired expression.

“But we don’t have any plants.” Ryan grinned.

The agent sighed and focused on my couch. He squinted in the afternoon sun. Then, surprisingly, he raised one hand and waved us off.

“What did you do?” I asked when we were safely past the checkpoint.

“I turned a plant into a couch.”

“No. I just pulled all the green leaves off. Now it’s just a couch.”

I smiled. “You are the smartest sweetie pie ever.”

While our border adventure put a dent in my mid-afternoon margarita buzz, I did get to keep what I would later learn was a bent twig couch. Its home is my front porch, where it invites visitors to settle on colorful pillows, as long as they don’t mind lounging between two once-stray cats who have claimed it for their own.