I don’t recall the last time someone asked for my measurements. But, since I’m performing in a community theater production of Company, the producer contacted me with the following message: “We are continuing to source vintage costumes, please send your measurements …”

So, I searched for the tape measure I had seen once or twice over the last four decades, and, when it failed to appear, I had to purchase a new one.

In the interest of not having to squeeze myself into a costume that might cause me to beg for a fainting couch, I figured I had best go on line and make sure I was measuring myself correctly. Along the way I was not surprised to note that 36-24-36 – or the Barbie shape – remains the ideal, and has been considered such since the 1960s. Those of us who grew up during that time understand the bewilderment caused by staring at those naked dolls and then looking in the mirror.

After fussing with the tape, I couldn’t help but pop my measurements into a Body Type Calculator that claimed it would define my shape.  I needn’t have taken the time. I am relatively curveless, so the fact that my physique is described as straight or rectangular was no shock. As a teen, my mother once looked me up and down in a dressing room and announced, “You are built just like your father.” Then she emitted the tiniest of disappointed sighs. As I was growing up, I sometimes recalled that comment with some understandable confusion.

The Barbie architype had its roots in the 1910s, when Gibson Girls like Camille Clifford were in vogue. Then, like now, the female ideal was almost impossible to achieve. 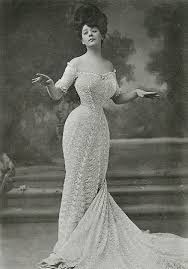 Gibson Girls like Camille Clifford were considered the feminine architype in the 1910s, a look which later morphed into the Barbie ideal.

In the sports world, where I spent a good chunk of my life as a reporter, the “tale of the tape” is an expression from boxing that refers to the pre-fight measurement of two opponents, a bit of pugilistic pageantry the point of which is to compare and contrast boxers physical attributes to one another.

And that, of course, is what we women do when viewing pictures and videos of the “perfect” people. We compare ourselves to them and, like my youthful Barbie musings, we rarely come out thinking positively about ourselves.

So, as I am older and presumably wiser, and believe in only optimistic thoughts … I am now cutting my new tape measure into itty bits.

Tickets are on sale now for the