I was raised in a time when children were pretty much ordered to eat everything on their plates. “There are starving children in Africa!” my mother would intone whenever we looked askance at some of her dubious-looking culinary creations.

Being of Irish and German extraction, my mother never met a dish she didn’t feel the need to cook the color and taste out of. I know this because I spent the first six decades of my life hating brussel sprouts, not realizing that the gray mush she shoved onto my plate was nothing like those lovely wee cabbages sautéed by my sweetie pie – browned crisply in butter and sprinkled with a dusting of . . . toffee. (I see you looking skeptical. Try it.)

My mother also insisted that one never turn down an offering of food. Ever. This was a moral imperative. Perhaps this was because she grew up during the Depression when food was scarce, or maybe it was because she took umbrage whenever anyone just nibbled around the edges of her meals. But, whatever the reason, this rule set me on a path of accepting whatever fare was placed before me. Which has worked out pretty well most of my life, though there have been some interesting gastronomic adventures along the way. 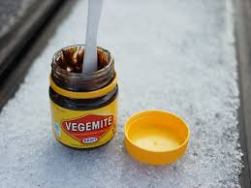 Traveling has always provided the opportunity for a wide array of noteworthy edibles. I learned this when I was offered Vegemite in Australia. Had a paid attention to the grinning Aussies huddled about as I bit into their beloved spread made from spent brewer’s yeast, I might have had an inkling of what was to come. While they compared the substance to peanut butter, it was more like aged, brown sardine paste that had been left too long in the sun. Let’s just say once was enough.

The next day, I attended a barbecue where the main dish was kangaroo burgers. Crocodile sausage came later. Both were OK, though biting into Skippy seemed inherently wrong.

In China, I was offered something called a one-thousand-year-old-egg. The name alone is off-putting. But the visual is even worse. I considered showing a picture here, but on the off chance someone might be enjoying breakfast, I reconsidered. Suffice it to say it’s a gooey black egg preserved in a mixture of clay, ash, salt, and quicklime. Did I eat it? Yes! I know the rules. Was I glad there was a large glass of wine on hand? Indubitably.

Once, on lovely evening in Fiji, I was seated on the ground with others in a circle when I was handed a coconut shell high-tided with kava. High-tide, in this case, means the shell was full to the brim. (Low-tide is a shell half full.) Kava, for the uninitiated, is a root that gets pulverized into what looks like dirt. And that is exactly what it tastes like. The village chief grinds the kava, mixes it with water, and distributes it to those who wish to imbibe. There’s a clapping ritual, after which one is expected to down the beverage in one gulp. Of course, since my mother trained me well, I complied, not knowing that the kava would just keep coming around. After five hits off the shell, my lips and tongue were quite numb so speech was a bit problematic, though I no longer noticed the beverage tasted like dirt. I will say I had one of the best night’s sleep ever, and not a hint of a hangover. 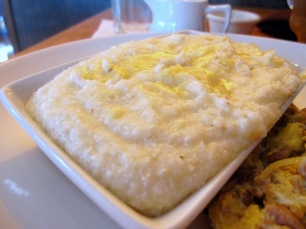 Sometimes, there were misconceptions about certain foods. My first TV sports reporting gig was in Columbus, Georgia. I had just moved there from Washington D.C., and, as you might expect, that change of scene was particiularly jarring. Some of my new work friends took me out to dinner and I found myself looking up at a middle-aged waitress.

“You want grits with that, honey?” She stared at me.

“Grits?” She thumped a pen on a pad of paper.

Several beats of silence were followed by what I recall as hysterical laughter from those at the table.

And here is where I have to admit that twice in my life, I sort of broke the food rule. One time, I was hanging around with my friend Jill, whose lovely mom was the antithesis of mine in every way, especially in regard to cooking. She would even make her kids something special, if they didn’t like what was being served. By comparison, my mom would stand by the table clucthing a metal pancake turner, ordering us to eat what was on our plates or starve.

Whenever possible, I would invite myself to Jill’s house for dinner. So, I asked what was on that evening’s menu.

“Tongue?” I thought she was kidding.

She got up from her seat at the kitchen table, opened the fridge, and pointed inside. “Tongue.”

Eh gads! There was a giant tongue resting on a plate, the meat covered with little bumps I thought might be taste buds. I took a breath. Suddenly, whatever my mom had planned didn’t seem so bad. I ate at home that night. 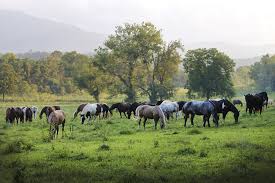 The only other time I avoided an offering of food was when I was a student in Luxembourg during my junior year in college. I was driving by a picturesque field where pretty, plump ponies were grazing.

“Oh! Look!” I said, pointing at the animals.

Lennart, whose parents had taken me in for the semester, said, “Those are the ones we eat.”

Later, I was invited to attend a reception where we students would be welcomed as honorary guests. We were to be served the national meal of Luxembourg — cheval and pommes frittes — which I learned, to my horror, was horse with fried potatoes. My brain was assaulted by visions of Black Beauty and My Friend Flicka and National Velvet.

To everyone’s surprise but my own, I developed a case of the flu the evening of the affair and had to miss that dinner. Under the circumstances, I think even my mother would have understood.