The expression “I saw my life pass before my eyes,” is generally used by someone who has had a near-death experience. While I have no idea what may occur when the end nears, I have always liked that thought, as long as one only has to recall the pleasant events.

Once, off St. Kitts, I witnessed four tiny juvenile  drum fish dancing in a row before a reef

Sometimes, I consider scenes that might appear in my head when my time comes, and I find it is a rather Forrest Gump-esque list: The night at Girl Scout camp on an island in Upstate New York, snuggled in my sleeping bag, a cool breeze wafting through the pines, lake water brushing up against the rocks. An elk in Colorado, maybe ten yards between us, his majestic antlered head and dark brown eyes freezing me in place, before he turned and disappeared silently into the forest. A dive in St. Kitts where I witnessed four tiny spotted drum fish, each no bigger than a thumbnail, long black-and-white fins waving as they danced in a row before a reef.

And now, I have a new vision to carry with me.  A few days ago in the sea off the north shore of St. Croix, we spotted three bottlenose dolphins from our dive boat. We quickly donned our scuba gear and descended to a shallow area white with sand. We knelt on the bottom and waited.

Thirty minutes later, chilled from inactivity, we gave up, and swam away, perusing a group of coral heads down over the edge of the sand. Cold and tired we headed back toward the boat. The dive master, E.T., and I were the last in the water. We waited below the boat as other divers ascended.

While diving in St. Croix we spotted three bottlenose dolphins from our boat, so we donned our scuba gear and dropped in to join them.

Then, E.T. grunted to get my attention. She pointed at three dolphins that swam directly toward us, their snouts dipping with each gentle push of their tails. The largest, a female perhaps eight-feet long, silvery-gray with a white belly, was escorted by two smaller males. The female eyed me and guided the others over my head. I could have reached up and touched her as they glided past. Then, she dove to the bottom and stuck her nose in the sand. She stirred up a white cloud, rolled onto her back and lay on the bottom, while the males playfully nudged her. Soon, she twisted, launched herself off the sand, and they disappeared.

We waited. And they returned, over and over playing before us. Then, the female stopped, touched her tail to the sand and straightened. I had always thought of dolphins as curved creatures, but she now stood perfectly straight, snout pointed toward the sky, fins out, a signal perhaps to the males who approached and straightened as well, clinging to her sides, motionless.

They appeared as a marble statue, majestic, magical, holding the pose above the sand, her bearing that of an empress. Then she twirled and the males followed. What came next can only be described in one way: dolphin sex. I felt like a voyeur but could not turn away. I will let you fill in the rest.

At one point, overwhelmed by the beauty, this gift I’d been given by the sea, I touched my hand to my heart. When I gazed at E.T., she had done the same. We stared at one another, knowing we had shared something special.

When we finally ascended, I was speechless. Those who know me would be astounded at the idea. And I am still unsure my words here do the experience justice. 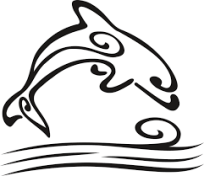 On the boat, I hugged the dive master, a woman I had met just a few hours earlier.

It was only then that I noticed the elegant tattoo she bore on her right hip: a dolphin.

6 thoughts on “When my life passes before my eyes, I will see dolphins”