My son came home the other night looking awful.

“Geez! What’s wrong?” I said, as I stared at him in the doorway.

“I’m sick, Mom.” He fumbled with his backpack, then headed for his room.

I couldn’t help but wonder what Mrs. Cleaver would have done.

My brain fixed on June Cleaver, one of those 1960s TV moms, a woman who would run to the Beaver’s side and offer hugs and cold compresses, gently lifting a glass of water to his parched lips, with nary a concern for her own health.

I’ve been a teacher for twenty years. I spend flu season dodging germy kids, backing away when they approach with rheumy eyes and runny noses. But I always get sick. Yes, I know Troy’s my child, but he’s 23, surely too old to need a mommy’s care.

Still, I forced myself to follow him. He sat on the edge of the bed looking miserable. I stood in the doorway and reached my hand to the door jamb. I swear I could feel those wee virus bugs crawling on my hand. I wiped my palm on my shirt. “Do you have a fever?”

“I don’t know.” He looked at me with blood-shot, blue eyes and swiped a hand across his nose.

“I can do this,” I muttered to myself. I took a deep breath and stepped into the room. My wrist on his forehead attested to a fever and made me feel, however briefly, rather motherly.

He coughed, a gurgling sound deep in his chest that said to me, “Run away! Run away!” So he would not think me an awful mom, I took measured steps toward the doorway, but as I was still holding my breath, I was getting a bit desperate. When I reached the hallway, I sucked in air, hoping he didn’t hear me.

There it was. He wanted my help. It didn’t matter that he’s a college junior, has a job, pays rent, volunteers at the Humane Society, and is currently in a little theater production of Annie Get Your Gun. He’s a successful young adult, but still needs my care.

Heartwarming, right? Later on, maybe, but at that moment the thought of going near him was horrifying. I calculated the number of days it took me to recover from the last bug that took up residence in my sinuses. Even when I do everything right – like rest, the definition of which apparently does not include doing laundry and vacuuming – it takes me a week to get well.

“What should I do?” he asked again.

“I’ll get you a decongestant.” Though that didn’t seem to be enough. I flashed on my own not-very-motherly mom and considered what she would do. “I’ll be right back.” 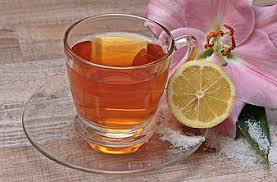 My mother used to make us hot toddies when we were sick: tea, bourbon, and honey. Today she’d be arrested for giving alcohol to children.

My mother believed she had a fool-proof method to combat illnesses, which she referred to as “having the quinsy.” A few minutes later, I held a steaming mug at arm’s distance. “Drink this.”

“What is it?” He sniffed the citrusy concoction.

“It’s a hot toddy. Breathe in the steam and drink it all. Then get under the covers.”

When I was a kid, my mom swore by the powers of the hot toddy. Her mixology methods included bourbon, which, to this day, I’m unable to stomach, as it tastes like medicine. My version includes tea, Grand Marnier, and a large dollop of honey.

“You also need a cheddar cheese and onion sandwich,” I said, again channeling my mother.

Two days later, Troy was healed. I was astounded and rather jealous at the robustness of his youthful immune system and wondered whether my mom’s remedies were really that magical.

“All better?” I asked, when he was headed out to work.

“Yep.” Then he coughed and reached to hug me goodbye.

I scurried away. “You know I love you, right?”

Does that make me a bad mom?

4 thoughts on “What would June Cleaver do?”