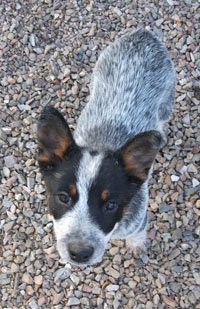 A lost pup forced me to make a decision.

Over the course of my life, myriad animals, too numerous to count, have almost magically appeared at my doorstep. My favorite example is Sir Winston, a wee creature with wobbly back legs and a misshapen jaw that my vet referred to as “the poster dog for inbreeding.” Whinny materialized, dirty and tick-ridden, one afternoon in my living room, as we were watching an NFL game. I stared at the tiny beast, shocked at his sudden appearance. Later, the neighborhood kids admitted they found the dog and had quietly slipped him through the front door, figuring, I guess, that I’d keep him.

For the past 30 years, I have invited all the creatures that have deemed me worthy of their care into my home.

Last week, on the ride home from school, Makayla – my young house guest – and I watched in horror as a small puppy darted toward six lanes of traffic. We were stopped on the other side of a busy intersection at rush hour. The puppy slammed to a halt at the top of the curb, then darted back to the cover of some parked cars. When the light turned green, I maneuvered across three lanes and pulled to a stop. Makayla leaped from the car. I waited, but didn’t watch, not wanting the vision of a dead dog burned into my brain.

After a few minutes, Makayla returned with a dirty, tired-looking, Queensland Heeler pup, that sprawled exhausted in her lap.

Of course, there isn’t a puppy on the planet that isn’t irresistible. But those tailless, spotted Heelers, bouncing about on thick, stumpy legs, are especially enchanting. In short course, we fell in love.

On the chance that the pup, which appeared to be well fed, might just be lost, we rushed to the vet to check for a chip. None was found. We’d picked him up in a location that was mostly industrial. No homes nearby, so we figured he’d been dumped, which I would learn is too often the fate for rambunctious heelers.

I will admit that I was apprehensive about bringing a puppy into the home mix. Initially, those concerns centered on something I had not ever considered in the past. In a few weeks, I will be 63. I looked at the puppy and did the math. Heelers can live up to 15 years, by which time I’d be pushing 80.

Then, age reared its ugly head again. When the puppy saw our 16-year-old blind doodle – dachshund/poodle – he pounced on her, nipping and barking in his high squeaky voice. Frantic, Baby searched for cover. Our other dog, little Mousy – a fluffy, white, puff ball – similarly cringed. Only my blue-eyed cattle-dog mix, Bella, immediately stepped in and played momma dog.

Some of my four-legged friends did not mind the new addition, but 16-year-old blind Baby, on the left, struggled with the pup.

Over the course of three days Bella and the puppy played raucously. While the two indoor cats didn’t seem to mind the little one, Baby and Mousy simply could not accept their new young friend. The realization dawned that it would simply be unfair to keep the puppy.

I had never given an animal to a shelter. The thought made me queasy. Still, on a whim, I typed Arizona Queensland Healer Rescue into my search engine and two popped up. After a phone call and an e-mailed picture of the dog, I drove out to the Healing Heelers Hearts Dog Rescue, still not entirely comfortable turning the pup over to strangers. But my fears were allayed by the compassion I witnessed, and any concerns I had about him getting a home vanished when a woman leaving the shelter grinned and pointed at the puppy. “I want that one!”

The woman was told it would be about two months before he would be ready for adoption, as he needed shots and neutering and some basic training.

The shelter lady, Tonya, looked at me. “He’ll be fine. We have another puppy here he can play with.”

After making a donation, I walked away, taking one last glance at the little dog, whose head rested serenely on Tonya’s shoulder. I wondered how long it would take him to find a forever home.

I would not worry for long. The next day, I looked at the shelter’s Facebook page. And there was the pup, newly dubbed Cruiser.

“What a cutie!” wrote one person in response to his picture.

“I can’t believe how precious and handsome he is,” gushed another. “I’m so interested in him, can’t wait for him to be available for a furever home.”

And so it went, a long list of folks eager to make the little guy part of their family.

Later, Makayla was not her usual bubbly self.

“The puppy. Maybe we could have kept him.” She stared at the floor.

I explained again that she would soon be off to college and would have had to leave the dog behind. And that Tonya would pick him a perfect home.

When she didn’t look convinced, I said, “You know, you saved his life.”

She brightened at the thought.

6 thoughts on “It’s hard to say no, but sometimes it’s the right thing to do”