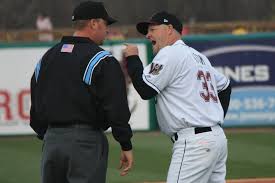 Is sportsmanship getting worse? You bet it is. Which is why there aren’t enough officials to go around.

The National Association of Sports Officials recently polled over 17 thousand arbiters in an effort to determine how things are going on the fields, courts, and diamonds around the country.

To anyone who has ever donned the uniform, the results were not the least bit surprising. Just over 57% of officials responded “yes” to the question, “Is sportsmanship getting worse?” About 46% have “felt unsafe or feared for their safety because of administrator, coach, player or spectator behavior.”

I have been sports official for almost four decades. I have gone nose-to nose with coaches, close enough to feel their spittle on my face. More than once, I’ve required a police escort to get to my car after a game. I had a tire knifed following a coach ejection. In a sub-varsity high school football game, when I was a nascent official, I remember vividly the moment a coach grabbed one of his players near the sideline. “Hit her on the next play!” he screamed, index finger jabbing in my direction. I stood frozen, unsure of what to do.

Had I been a more experienced official, I would not have had the least compunction about immediately ejecting the coach. Had the player hit me, I might today own the coach’s home, as I would have had him and the player arrested for assault. Thankfully, the boy came nowhere near me that day.

The big problem is that young officials – still learning the trade, uneasy with the requirements of what is mostly a thankless job, and not yet enveloped in that protective shell that reminds us to stay calm and not take attacks personally – are unwilling to weather the constant stream of abuse and are quitting in droves. Add to that decline the huge number of veteran officials who are hanging up their whistles everyday. When you consider that participation levels in youth and high school sports has skyrocketed, it’s easy to see that there’s a massive storm ahead. Because, as much as fans and coaches contend that we are the bad guys, there are no games if we don’t show up. As my favorite T-shirt reads, “Without the Ref it’s only Recess.”

It’s not shocking that most sportsmanship problems are caused by parents. When polled, officials rated the parents the culprits almost 40% of the time, in contrast to 30% for coaches and 10% for players. And where is sportsmanship at it’s worst? Again, no surprises: youth competitive sports account for 36% of the problems.

The point, of course, is that it’s getting rougher out there for those of us who blow whistles or call balls and strikes. Note that officials don’t expect all rainbows and unicorns when they step between the lines, but some basic civility would be nice and it might help us do our jobs just a bit better.

I’d also like to ask each and every parent who has a child participating in youth sports to give the following a try. Step in and make a few calls. Pick up a whistle and see how you do with that one look from one angle that we officials get to see on every play. When you are engulfed in all that swirling action, you make the call. And, maybe, the next time you feel like berating an official, you’ll remember that moment and react with empathy instead of anger.