The Weight of Ink 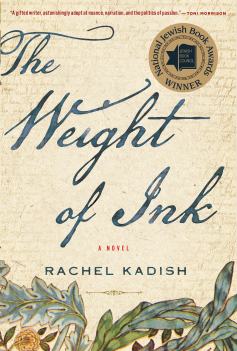 The Weight of Ink, by Rachel Kadish, tells two stories. One is the fish-out-of-water tale of a 17th century Jewish orphan who is taken in by a rabbi in London following the horrific persecution of the Jews in Portugal during the Inquisition. The young woman, Ester Velasquez, is the unfortunate victim of an insatiable intellect. Unfortunate solely because scholarly women were frowned upon. A woman’s place, as in most cultures until relatively recently, was in the home making babies. There simply were no other options for a “normal” woman.

A modern-day counterpart to Ester’s tale is that of Helen Watt, an ill, bitter historian who has spent much of her life buried in musty libraries, forever wondering if she made the right choice in leaving the brooding Israeli she once loved.

The two women are united by a cache of documents found hidden under a stairwell, papers that Helen and Aaron Levy, a self-centered, American doctoral student, begin translating, an endeavor that leads them to the mysterious scribe who appears to be dutifully documenting the teachings and letters of the blind Rabbi HaCoen Mendes, but who soon begins sharing her own thoughts with the great religious philosophers of her time under assumed names.

Kadish does an admirable job of relating the frustration of Ester’s world where there are no half-way options, and the life of those in the nascent Jewish London community where members often wore crucifixes to hide their true religious leanings. Her descriptions of the city during and after the Great Plague are both evocative and chilling.

It’s clear Kadish spent a great deal of time researching the beliefs of 17th century religious scholars, especially in regard to man’s relationship with God. Often, these opinions are presented as letters. I did struggle at times with the depth of the concepts presented and perhaps should reread some sections, as I probably did not get the gist of all the philosophic discussions. Also, I struggled to understand the connection Kadish was trying to make between Helen and Esther, aside from their similar approaches to marriage and domesticity. But that is probably no fault of the author’s.

Clearly, The Weight of Ink is no summer beach novel. However, it is a worthy, though challenging, read.

About Reviews: Since I have asked so many people to review my books, I thought it only fair that I do a few myself. As I am a slow reader, my reviews will be sporadic. Also, I will review books, movies, and TV shows of my own choosing and will not take requests.