In 1995, I became intrigued by a crime. The deadly sabotage of the Amtrak Sunset Limited near remote Hyder, Arizona remains a cold-case 23 years later. The FBI continues to offer a $310,000 reward for information leading to the arrest and conviction of those responsible.

My novel, A Light in the Desert, is based on the crime and, as a former reporter, I made sure the facts surrounding the event are as they occurred.  The book was originally published in 2004. That said, I am very excited that Treehouse Publishing, a branch of the Amphorae Publishing Group – the folks who released my novel The Scent of Rain – decided to reissue the book.

But A Light in the Desert, which is set for release on November 6, 2018, is more than a detailed account of an act that could be a copy-cat crime based on a similar unsolved sabotage that killed 24 people in Harney, Nevada in 1939. My novels are always about people who struggle with events and issues in their lives and communities.

I am looking forward to sharing introductions of those characters with you over the next weeks. There’s the protagonist, a former military sniper who is succumbing to a strange form of mental illness called the Jerusalem Syndrome, the pregnant 16-year-old shunned because of a facial disfigurement, the Children of Light who have secluded themselves in the desert for decades as they wait for the rapture, and others.

Thank you for joining me on this adventure. 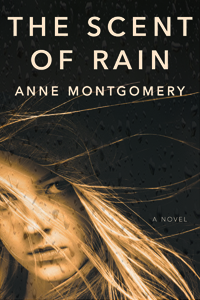 Anne Montgomery’s novel, The Scent of Rain – winner of the 2018 Independent Publisher Book Awards West-Mountain – Best Regional Fiction Bronze Medal – tells the story of two Arizona teenagers whose fates become intertwined. Rose flees into the mountains to escape from her abusive polygamous community where her only future is marriage to a man older than her father. Adan, whose only wish is to be reunited with his mother, is on the run from the cruelties of the foster care system. Are there any adults they can trust? Can they even trust each other?  The Scent of Rain is available at https://www.indiebound.org/book/9780996390149 and wherever books are sold.