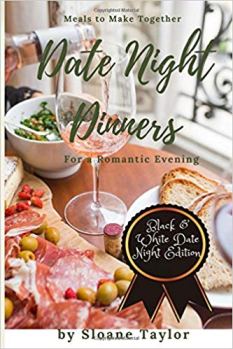 I am not the cook in the house. Though I did spend twelve years married to a chef, I am not passionate about culinary adventures, unless there’s chocolate involved. I’ll admit here, none too humbly, that I’m a damn good baker. But since the Date Night Dinners cookbook had no dessert section, and I had agreed to review one of the recipes, I drafted my sweetie pie to play test kitchen master chef.

Ryan read the recipe in the produce aisle of the grocery story. “It says we need parsley, but maybe cilantro would be better.”

I rolled my eyes. “You have to follow the directions.”

Then we walked over to the meat counter. Terry, our butcher friend, came over and gave me a hug. “Beef Stroganoff is my favorite,” he said. Which precipitated a personal-shopper tour where he and Ryan haggled over the best tomato paste, egg versus egg yoke-less noodles, and preferences regarding beef stock and beef broth.

I wandered into the baking aisle.

Once we made it home, I sat in my usual kitchen chair, sipping our favorite rum. “Liquid sunshine,” I said, swirling the ice.

I watched Ryan drop pieces of sirloin into a hot skillet. A delicious odor permeated the room.

“Hey! Where’s the recipe? You’re supposed to follow the recipe.”

Ry stared at me over the rainbow-colored readers he’d perched in front of his glasses. 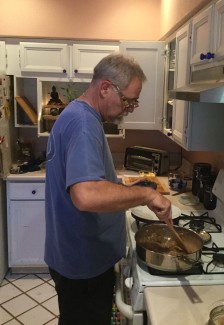 Ry’s the cook in our house, so he got to test the Beef Stroganoff recipe. But he needed my over-the-counter specs to see what he was doing.

I smiled. “You know, these are Meals to Make Together for a Romantic Evening. It says so right on the cover.” I reached for the rum again.

“I’m having romance right now,” he said. “I’m cooking the trimmings down for the dogs. I love the dogs.”

After tossing some tidbits to our furry friends, Ry reached for a teaspoon to measure one of the ingredients.

“No! You have to use the real measuring spoons.”

And then, for some inexplicable reason, Ryan launched into his Saturday Night Live impression of Julia Childs and drew a big sharp knife across his wrist. I think that was my sweetie pie’s way of telling me to butt out.

And so, I reached for the rum, and sat back to observe. 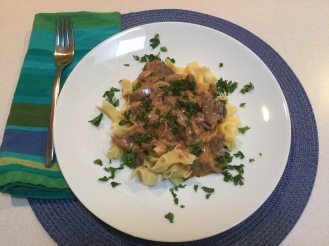 The Stroganoff was rich and creamy, still next time we’ll add a bit of spice.

Turns out the recipe was easy to follow and took only about an hour to prepare from start to finish. I’m guessing Ryan would say it would have been quicker had I found something else to do, but where’s the romance in that? The beef was perfectly cooked, the sauce creamy, and the noodles just the right consistency. I had not eaten Beef Stroganoff previously, but it’s easy to see how in a cold climate it would be a perfect comfort food. The only complaint we had was not the fault of the recipe, but rather one of geography. We have lived in the Sonoran Desert for over 25 years. Here in our part to the world few meals are missing peppers of some kind. So, the next time we make Beef Stroganoff, I’m guessing it will be a spicier version. Maybe then, it won’t be only the dogs getting some romance.

Combine sour cream, tomato paste, and Worcestershire sauce in a small bowl. Set aside while you prepare the remainder of the recipe. Trim off fat and cut steak into narrow strips. Combine flour and pepper in a paper or plastic bag. Add steak pieces, a few at a time, and gently shake to coat the meat. Set pieces on a plate as you coat them. Melt butter and oil in a large frying pan. Add onions and sauté for 3 – 5 minutes. You want the onions soft but not browned. Add beef, turn up heat to medium-high. Sauté meat until browned, turn often so it doesn’t burn, 5 – 7 minutes. Slowly pour in stock, scraping pan to combine browned bits into the mixture. Reduce heat to medium. Stir in mushrooms, cover, and cook until meat is tender, 3 – 5 minutes. Reduce heat to low. Stir in sour cream mixture by heaping spoonfuls. If the sauce looks too thick, slowly add a bit more beef stock until you achieve the consistency you prefer. Cook uncovered 1 – 3 minutes or until hot. Do NOT let pan come to a boil.

Egg Noodles Follow the package directions to cook. If the noodles are done before the Stroganoff, drain them in a colander and set the pot or lid on top of the noodles to keep them warm. REMEMBER: all noodles/pasta can easily be re-warmed by pouring hot water over them before serving. To serve, scoop egg noodles into soup/salad bowls. Spoon hearty portions of Stroganoff over the noodles and then scatter on parsley. Leftovers are excellent. Refrigerate noodles and meat in separate containers. To reheat the Stroganoff pour it into a saucepan, add a little beef stock to thin it, and warm through. The noodles are easy as well to reheat. Bring a small pan of water to a boil. Add the noodles for a few seconds then drain.