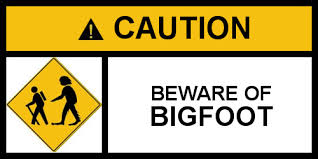 The chances of a child being abducted by a stranger are not much higher than you running into Bigfoot.

“You have to be here on time,” I say to one of my students for the thousandth time. “It’s important.”

“You’re fifteen. Certainly, old enough to figure out how to get yourself to school on time.”

But I know better than to pursue the conversation. I understand the problem. Stranger Danger!

The term, which was popularized in the 1960s, backfired big time. Not only did it make parents believe the chances of their child being spirited away by a stranger were astronomical, it gave children the unfounded belief that all the people they knew were safe.

Simple fact checking proves that the chances of a stranger disappearing with a child are almost ridiculously rare.

According to David Finkelhor, the director of the Crimes Against Children Research Center at the University of New Hampshire, “Children taken by strangers or slight acquaintances represent one hundredth of one percent of all missing children.” In other words: This is not your primary concern. This might not even be your secondary or tertiary concern. On your totem pole of concerns, this is buried hundreds of feet below the earth.”

As a teacher of almost two decades, I often find myself interacting with children I meet outside the classroom. That parents believe I might have nefarious intentions breaks my heart.

A perfect example happened one day when I was attending a rugby game. A friend was playing, so I leashed my sweet new puppy and went to the game. For those unfamiliar with rugby, let me say here there is no experience quite like it in sports. The players knock the snot out of each other, then do a lot of group hugging and head to the nearest bar, where they share a meal and some bubbly grown-up beverages and then settle in for a sing-along.  I mention this because rugby is a family-friendly affair.

I trailed my six-month old, black and white puppy through a maze of colorful blankets spread beside the pitch. Fans cheered from folding chairs as they nibbled on chips and fried chicken, while sipping cool drinks.

Suddenly, a little girl appeared. She was maybe three. Crouching on stubby legs, she cooed at my pup, then giggled in delight. For reasons I can’t quite recall, I handed the child the leash and she walked my dog about a dozen feet.

Out of nowhere, a woman emerged from the crowd and yanked the child by the arm.

“Does Mommy know this person?” she shrieked and pointed a finger at me.

The child looked at her mother, turned a bright shade of crimson, and started to wail.

“This is a stranger!”

I opened my mouth to speak but nothing came out. More people turned to watch. I wanted to say, “Ma’am, I would never hurt your child. She only wanted to pet the puppy.” But I just stood there mute.

The woman dragged the child away. I picked up my dog’s leash, feeling the stares from those who had witnessed the moment, and wished I could just disappear.

What did that mother achieve? She taught her child to fear everyone, except perhaps the family members, neighbors, and acquaintances who, statistics show, are most likely to harm her.

Say: You should not approach just anyone. If you need help, look for a uniformed police officer, a store clerk with a name tag, or a parent with children.

Don’t say: Stay away from people you don’t know.

Say: It’s important for you to get my permission before going anywhere with anyone.

Don’t say: You can tell someone is bad just by looking at them.

Say: Pay attention to what people do. Tell me right away if anyone asks you to keep a secret, makes you feel uncomfortable, or tries to get you to go with them.

Now, let’s banish the term stranger danger once and for all.