And yet, for most of us, the absence of these creatures makes no difference in our daily lives. Perhaps that’s why some people roll their eyes when they hear about saving the tiny Snail Darter or the Polar Bear or the Gray Wolf.

But what if a creature existed that could change lives with its passing? And I mean change in a big way.

I first became aware of the giant, Australian bird that vaguely resembles an ostrich, but which sports a fabulously-colored keratin casque, while walking in the Daintree Rainforest – a UNESCO site like the Great Barrier Reef over which it hovers – that has one of the most complex ecosystems on Earth, hosting species whose ancestors date back 110 million years.

“The cassowary is extremely important,” our guide explained. “Without the bird, the forest would not exist.” 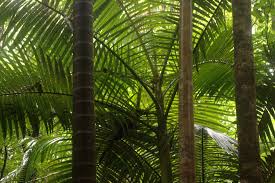 Daintree is primordial. Giant strangler figs crawl across the forest floor. Dappled sunlight sneaks though a thick green canopy. Massive ferns sprout from leaf-littered soil. The outside world is muted and the sight of a dinosaur might not seem strange.

I learned the cassowary is a one-bird master gardener, a creature that combs the forest floor eating fallen fruits, even gobbling up plants that are toxic to other creatures. The bird consumes up to 150 different types of fruits. The existence of 70 to 100 plant species depends on the cassowary pooping out their seeds in a pile of protective, compost-like dung, the smell of which repels seed predators. The cassowary is a “keystone” species, which means a species on which others in an ecosystem largely depend, one that, if removed, would cause the ecosystem to change drastically.

So, no cassowary, no rainforest. But there’s more. Below Daintree are mangroves, a mucky area rich in bio-matter that filters down from the forest. All types of young creatures  – crabs, jellyfish, snappers, jacks, red drums, sea trout, tarpon, sea bass, and even juvenile sharks – thrive in the protection of the fertile water of the mangroves.

Off shore, the Great Barrier Reef follows  Australia’s eastern coast. There, too, the nutrients from the forest help feed the tiny creatures that build the reefs. This fertilizer promotes the growth of phytoplankton which nourishes the zooplankton on which the coral polyps dine. Without this sustenance the coral dies, losing the ability to protect the shoreline from waves, storms, and flooding, which leads to loss of human life and property.

Also consider that roughly 25% of the world’s fish species spend part of their lives on the reefs. If the Great Barrier Reef dies – note that half of the more than 1,400-mile structure has already perished – vast fisheries could collapse leading to starvation that could ultimately affect billions of people.

Which brings me back to the cassowary. It’s estimated that only 12,000 to 15,000 of the birds remain in the wild. Loss of habitat is decreasing their numbers, as are attacks by dogs.  Another problem is humans driving too fast.

Why should we care?

I think the cassowary is but one example of the interconnectedness of life. Perhaps that’s something we should think about.