Most people are afraid of something. For me it’s tight spaces. I’m not sure when I first fell victim to this phobia, but it might have been on a high school Friday night when a bunch of us were going to a drive-in movie. (Remember those?) I was encouraged to get into the trunk of a car before we drove through the gates – something about too many kids in a car. In any case, I freaked, and clawed the underside of the hood and yelled until they let me out.

So, I’m claustrophobic, a malady that smacked me in the head one day when I was one hundred feet below the surface of the sea staring at a hole in the ocean floor.

I’d been told about the lava tube we would encounter. I glimpsed the small opening as another diver’s fins disappeared into the darkness. I paused, sizing up the mouth of the cave. It was not much wider than my wingspan and perhaps three-feet tall.

I  turned to my sweetie pie, who was hovering by a woman who was uncomfortable diving. I pointed to the mouth of the cave and he shook his head. Then he took the woman by the hand and helped her swim above the tube. 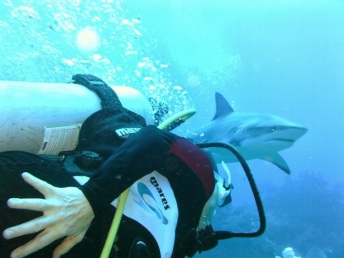 I’d take a shark anytime over a narrow underwater cave.

I stared at that hole and wanted nothing to do with it. It looked so small and dark, but then I saw a light flickering inside and, without thinking, I swam to the opening and ducked inside. White sand flowed along the cave floor. I saw fins in front of me and followed. Then, suddenly, the fins and the light vanished, leaving me in total darkness.

I stopped abruptly. Then panicked and considered backing out, but turning around in that narrow space in complete darkness was problematic. The back of my tank caught on the top of the tube. The contact was slight, but was enough to make me sick to my stomach. I dropped to the floor and dug my hands into the sand in an effort to calm myself. I started sucking air, which was bad. The compressed air in a scuba tank is used up quickly on a deep dive. I had to move forward soon, but was frozen.

I raised my head and stared into the darkness. I held one hand before me but could see nothing. I dug my free hand into the sand and lifted the other, pulling myself forward, gripping the sand so hard my hands hurt. Slowly, I moved forward and down. The tube descended beneath the sea floor, angling deeper as I went.

Why had I not brought a light? And why had I been dumb enough to go in without such an important piece of equipment? I continued inching forward. How long was the tunnel? Why had I not asked? The questions swirled.  I was tempted to reach to the side to see how wide the tube was, but was afraid to know the truth.

Sometime later, I caught a glimmer piercing the top of the tube, a broken spot in the ceiling that glowed with soothing blue light. I rounded a bend and was graced with an opening. Dim light flooded the the cave, illuminating walls that were startling close. I kicked hard and exited. My sweetie pie was overhead. He knew how I felt about small places, so he was concerned.

Later, after a hot shower and a strong, grown-up beverage, we talked about that deep, dark, watery hole.

Yes, I’m glad I tried to conquer my fear, still I don’t think I’ll do anything like that ever again.

7 thoughts on “Facing our fears: Once was enough”