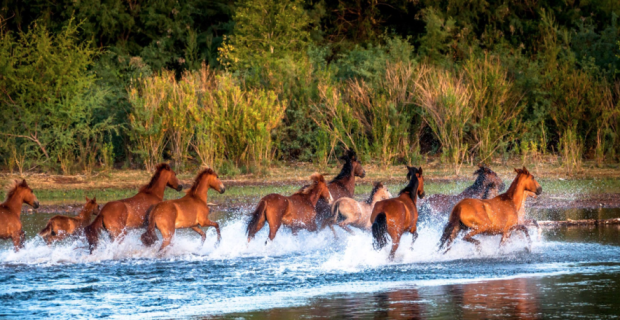 Horses are breathtaking creatures, especially when running wild. Watching them move over open landscape is magical. However, that does not mean the existence of roaming horses in our modern world is not problematic.

I had the chance to study wild horses while researching my upcoming novel Wild Horses on the Salt, which is set for release on June 14, 2020.

The issues surrounding these animals are many. First, there are those who don’t believe what we call wild horses are wild at all. Some environmentalists call them an invasive species, because horses died out in the Americas 12,000 years ago during the last ice age and were not returned to the Western Hemisphere until Columbus landed in the Virgin Islands in 1493.

Others, especially in regard to the Salt River Horses here in Arizona, believe the creatures are feral animals. Tim Kenney of the Red Mountain Cattle Company which sits along the Salt River explained how at least some of these horses ended up roaming free. 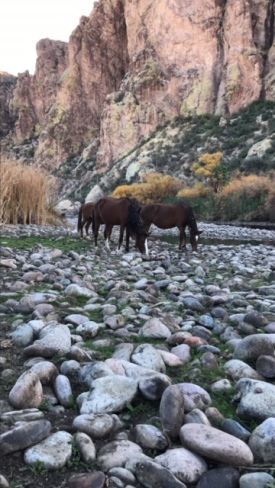 Wild horses eat away at riverside vegetation, destoying habitat needed by birds and other desert creatures.

And those animals bred. The question is if a horse is born in the wild is it actually wild? Merriam-Webster defines a wild horse as “an undomesticated horse or a feral domestic horse,” but many scientists disagree. Science Daily says, “The true wild horse is not merely a feral horse like the Mustang; a true wild horse is one that was never successfully domesticated.”

Truly wild or not, the horses cause problems, especially as the modern world encroaches on their habitat. Despite the myriad Horse Crossing signs along the roads skirting the Salt River, car accidents that injure both animals and humans are sadly common. The horses, naturally drawn to the river, degrade the streambed, eating cottonwood and willow saplings, preventing the regrowth of the massive trees, the spreading branches of which once cooled the water and protected fish hatchlings and other aquatic life from the hot desert sun. The horses eat other desert plants, as well, destroying nesting sites of both resident and migrating birds and allowing the growth of invasive species like the massive and almost indestructible giant reed that chokes the riverside.

Ted Williams, an avid hunter and fisherman and long-time contributor to Audubon magazine, was quoted as saying that the environmental destruction caused by wild horses is devastating and is leading to the demise of many other creatures.

Invasive giant reed takes over the riverside, providing neither nesting sites for birds nor shade to shield aquatic life from the scorching desert sun.

“Because horses are the only ungulates in North America with solid hooves and meshing teeth, they are particularly destructive of native vegetation,” he said. “A feral horse is a far greater threat to native ecosystems than a cow. When grass between shrubs is gone cows move on; horses stomp the shrubs into the dirt to get the last blade. What’s more, when cattle deplete forage they’re moved to new allotments, and they’re taken off the range in winter. But horses pound vegetation all year. And because horses live on range incapable of consistently sustaining them they sometimes starve and, in the process, cause the starvation of such sensitive desert creatures as sage grouse, bighorn sheep, Gila monsters, pronghorns, and desert tortoises.”

As the Phoenix metropolitan footprint expands, the horses are forced into smaller corridors, where there isn’t enough food. As Williams explained, frequently, they starve. Then, well-meaning but perhaps misguided people feed them. The Arizona Game and Fish Department warns that providing food for wild animals can be dangerous and detrimental, still horse groups ignore the warning.

The situation has become politicized with the cattle ranchers, environmentalists, and bird fanciers facing off against horse lovers. I discovered just how politicized when I stopped along the road to watch as bales of hay were being tossed to a group of waiting horses.

A large man stared at me as I approached. “Are you with us or against us!” he said.

“I’m not taking sides,” I answered, surprised at the question. Though I stayed and watched the volunteers feed the horses, no one spoke to me, unhappy, I suppose, that I did not appear to be an avid supporter.

Don’t get me wrong. I want the horses to be well and free. But, right now, no one knows how to accomplish that goal. Nor do we have a handle on the ultimate cost required to save these beautiful creatures, both in dollars and environmental degradation.

Paperback Pre-orders will be available soon.