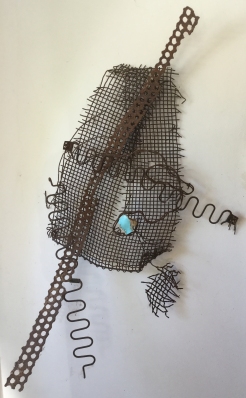 This odd collection of rusted metal  has hung on my porch wall for almost 25 years.

The older I get, the less stuff I want. With that in mind, I have been purging my closets and drawers and cupboards. As anyone who has ever tried downsizing can attest, sometimes it’s hard to part with possessions. And, so, I found myself staring at the strange conglomeration of rusted metal that perches precariously on my porch wall.

It’s hard to call the haphazard collection of desert junk art. The arrangement has hung in that exact spot for close to 25 years. Its purpose, once upon a time, was to hide a stain, the source of which I never determined. I recall staring at the mark and, unable to afford a can of paint to cover the blemish, I began hanging bits of rusted metal I’d found on past rock collecting trips to conceal it. Each piece supports another without the benefit of glue or nails or screws. At its heart is a turquoise-colored piece of chrysocholla.

When I started the project, I had few possessions. I came to this house nine months after a knock on the door changed my life. I was a sportscaster at ESPN and my contract had not been renewed, so I was out of a job. I should not have been shocked, I suppose, when a sheriff’s deputy appeared and announced we were being evicted. The owner of the home had failed to pay the mortgage. We had 48-hours to vacate the premises.

Luckily, kind friends helped us stow our belongings in a storage facility, and one was generous enough to let us stay with him for a while. But, with two large dogs and three cats, $33,000 in debt, and my marriage crumbling, the situation was a stopgap.

It was my dear friend Abby who came to my rescue. “Come back to Phoenix,” she insisted. “You can stay with me.”

“But the animals…” The thought of parting with them broke my heart.

I packed some clothes and my pets into a Geo Prism and drove across the country alone.

I’d like to tell you that my situation turned around instantly. But like those dealing with grief of any kind, there are steps in the adjustment process: denial, anger and resentment, bargaining, depression and, finally, acceptance.

I would come to this house as a renter. It would not be until years later, after going back to school to become a teacher, that I would own this home.

I remember the day I finally had the porch painted. I stared at my collection of metal and removed the assemblage from the wall piece by piece. But when the paint dried and the stain was gone, I could not bring myself to discard my sculpture. And, so, I placed the pieces back on the wall one at a time.

Now you’d think I would want to forget the events that brought me here. Push the bleak times out of my mind. Strangely, that is not the case. I find a great sense of elation in knowing I had friends who reached out to help me when I felt utterly lost. And I delight in the successes I’ve enjoyed since that low point.

Perhaps, then, you’ll understand why my metal collection remains perched on my porch wall, a remembrance of the winding road I traveled to this spot.